Ms Farouq has been at the centre of a viral rumour that President Buhari would on Friday, October 11, marry a second wife.

The peddlers of the fake news claimed that the president would be marrying the minister after Jumat service on Friday.

However, beyond the raging wedding rumour which has been put to rest, especially with the arrival of the First Lady, Aisha Buhari, from the United Kingdom where she had been for about two months, many do not know who Sadiya Umar Farouq really is.

Here are key facts you should know about Ms Farouq

Ms Farouq was born on November 5, 1974. She is from Zurmi local government area, Zamfara state.

She attended Federal Government Girls’ College Gusau, Zamfara state after which she proceeded to Ahmadu Bello University (ABU), Zaria, Kaduna state where she obtained her first degree in Business administration in 1998.

She further obtained her Master’s degree in International Affairs and Diplomacy in 2008. In 2011, she bagged a Masters in Business Administration (MBA), both from the same university.

Yesterday, i attended a walimah organised by my family and friends to congratulate me on my appointment as a honorable Minister by President Muhammed Buhari. 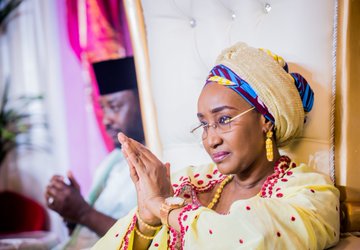 360 people are talking about this

From 2011 to 2013, Farouq occupied the position of the national treasurer of the Congress for Progressive Change (CPC), the party on which platform President Buhari contested for the 2011 presidential election which he lost to former president Goodluck Jonathan.

The CPC is one of the four political parties that merged to form the ruling APC which eventually ousted Jonathan and the PDP in 2015.

She was the APC’s national treasurer from 2013 to 2014. She was thereafter appointed as a member of the All Progressives Congress Presidential Campaign Council.

She headed the election planning and monitoring, field operations, and fundraising committee making her play a pivotal role in the success of the party in the 2015 general elections.