Muhammadu Sanusi, the Emir of Kano says policies like ‘quota system’ and ‘federal character’ have caused the north of Nigeria more harm than good over the years.

The emir spoke on Monday at the Kaduna state government house during a programme to commemorate the 60th birthday celebration of Nasir el-Rufai, governor of  Kaduna.

Sanusi said as a leader, repeating the same thing and expecting a different result shows that something is wrong.

Also Read: The Emir Of Kano Reveals The Most Important Decision Taken By President Buhari

The Emir adds that investing in quality education across the 19 northern states is the only way to save the region from endemic poverty and underdevelopment.

“The truth is, if you look at what Nasir is doing in Kaduna, with 40 percent of his budget in education, that is the only thing that is going to save the North. I know that when we say these things, they don’t go down well.

“We have been saying this for 20 to 30 years. If the North does not change, the North will destroy itself. The country is moving on. The quota system that everybody talks about must have a sunset clause.

“The reason people like Nasir stand up and they are nationalists is that they don’t have any sense of inadequacy.

“So, as we celebrate Nasir at 60, we need to celebrate him as a public officer who is addressing the core problems of his constituency. It is education, it’s girl child education, it’s women’s right, it’s child begging, it is parental irresponsibility, demographic growth, it’s managing a multicultural, multi-ethnic and multi-religious society and bringing them into one community where they are all citizens and he has done a lot that we can learn from. 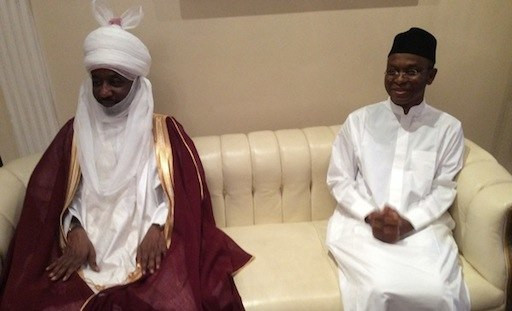 “You don’t need to rise on being from Kaduna State or being from the North or being a Muslim to get a job, you come with your credentials, you go with your competence, you can compete with any Nigerian from anywhere.

“We need to get northern youths to a point where they don’t need to come from a part of the country to get a job. And believe me, if we don’t listen, there would be a day when there would be a constitutional amendment that addresses these issues of quota system and federal character.

“The rest of the country cannot be investing, educating its children, producing graduates and then they watch us, they can’t get jobs because they come from the wrong state, when we have not invested in the future of our own children,” Sanusi says.

A recent report by the World Bank states that the north accounts for 87 percent of the poorest people in Nigeria. Sanusi says no northern leader is happy about the statistics.

“When we talk about birthdays, we talk about happiness. Just last week, someone asked me, ‘ are you happy?’ And I said, ‘ I am not’. And the person was surprised. The truth is, nobody who is a leader in northern Nigeria today can afford to be happy.

“You cannot be happy with about 87 percent of poverty in Nigeria being in the north. You can’t be happy with millions of northern children out of school.

“You can’t be happy with nine states in the North contributing almost 50 per cent of the entire malnutrition burden in the country.

“So, we wish Nasir a happy birthday, but we do not want him to be happy as a leader. Because you are happy when you think you have reached a state of delivering and taking your people to where you want them to be.

“Now, because of the condition of northern Nigeria, it is almost correct now to say that if you are seen as normal, if you are a governor in the north or a leader in the north, and you are seen as normal in the sense that you continue to do what your predecessors have been doing, doing the same thing, which has been normalised, then, there is something wrong with you, you are part of the problem.

“The real change in the north will come from those who are considered mad people, because you look around and say if this is the way we have been doing things and this is where we have ended up, maybe we need to do things differently.

READ MORE:  Why I Slapped A Lady Who Grabbed Me - Pope Francis Confesses